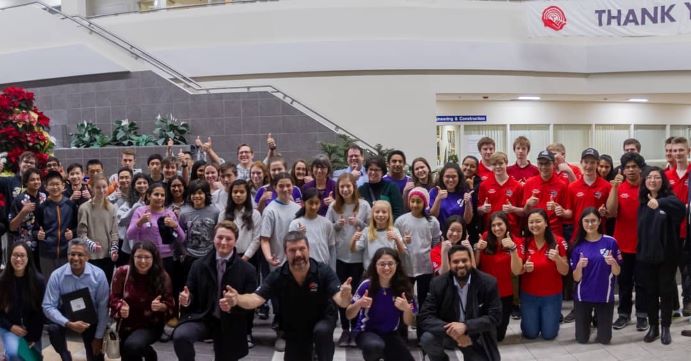 It was another great night at the Oakville Town Hall! Our team, along with our sister team 1374 played host to Oakville's FIRST Community Event. All other FIRST teams in Oakville were invited to this event, along with volunteers, mentors, local politicians, and FIRST heroes. At the event, we celebrated all of our accomplishments over the past year and recognized people that help make the robotics programs in Oakville so great. Everybody had a great time, and we are excited to see everybody next year!

Once again OT Robotics participated in Oakville Santa Claus Parade. The night before the parade, our team worked together with our sister team 1374 to decorate our beautiful float, and we were up early the next morning to spread some holiday cheer to the community. Many people showed up to experience the parade in person, as well as being broadcast on Oakville's various cable news channels. Everybody had lots of fun, and we are very excited to participate in the parade next year!

This past summer we again ran our Robotics Camp with the Town of Oakville to teach kids robotics and give them a fun camp experience. This year we continue to have our 8 weeks of camp at the Queen Elizabeth Park Community and Cultural Centre, and this year we increased the number of weeks at River Oaks Community Center from 4 weeks to 5 weeks. We provided the campers with Lego Mindstorms and VEX robot kits and taught the campers how to build and program their robots while also organizing other fun camp activities and games to give the kids a full camp experience. By the end of each week, the campers had lots of fun and we are hoping to see more kids next year!

This year at the CNE (Canadian National Exhibition) we hosted and competed in an offseason event where many FRC teams were invited to compete in the years game FIRST Power Up. We also had a LEGO Robotics table where we would talk to kids and parents about how they could get involved in robotics. It was a very fun competition weekend and we hope to continue hosting this offseason event in the future.

The main street of the downtown core was again made for the public to walk on, and people were able to enjoy what all of Oakville has to offer. We were of course in attendance with our sister team 1374 to promote STEM and show kids and adults alike what robotics is all about. People again had the opportunity to get up close and personal with all of our team members and of course our robots. We gave people the chance to actually drive one of our robots around and give kids rides on our chair-bot. We are very excited to see everybody next year!

On January 17th, 2018 our team was able to showcase our 2016-2017 competition robot NEMO on the national stage. Available to over 11 million people across the country, this segment of The Zone on YTV helped us reach out to young viewers and show them how cool robotics is and discuss how they could get involved in the FIRST program. To watch a clip of the segment, click Here

On November 17 teams 1334 and 1374 built a beautiful futuristic themed float for the Oakville Santa Claus Parade. The next morning we were downtown Oakville bright and early to participate in it. We exposed many people to FIRST, and we were really happy to see all the joy in the crowd even with the rainy weather. We can't wait to participate again next year.

On the opening weekend of the CNE, our robotics team was part of the Innovation Garage where we showcased our robot NEMO to the public. We showcased his ability to deliver a gear to a peg and we let people drop the gear right into his pickup system. We also had a LEGO robotics table where we showed kids how they could start their robotics careers and talked to them about how fun robotics is. We had a great time that weekend and we are excited to be able to do it next year!

This past summer we ran a Robotics Camp with the Town of Oakville to teach more kids and give them the opportunity to explore robotics. However, this year was extra exciting as our team increased the number of weeks from 6 weeks to 8 weeks of camp at the Queen Elizabeth Park Community and Cultural Centre. Some more exciting news from this year is that we had 4 weeks of camp at another location, River Oaks. With two locations there is now the ability for us to reach out to even more kids and get them interested in robotics and STEM.

Our team attended the James W. Hill school fair on May 27th to promote STEM in the community, help the school raise money, and promote our teams by showing off our robots.

On Saturday, November 19th our teams participated in the Oakville Santa Claus Parade for the fourth year! We all helped to decorate a beautiful float on the night before and then drove it through Oakville Saturday morning, handing out candy canes. Everyone had lots of fun, and we look forward to doing it again next year! Special thanks go to our mentor, Chuck Woods.

Come on down to the Ex! The CNE opened Friday, August 20th, and our booth was running on the Friday, Saturday, and Sunday. Our team was located in the CNE Innovation Garage, alongside other Halton FRC Teams.  We have been using this opportunity to speak with interested families about FRC and FIRST, and to spread the word about our team. In between demonstrations of our Chairbot, visiting other Robotics booths, and using MACKENZIE to interact with crowds, our members were taking breaks to enjoy all the Ex has to offer. We also had the pleasure of meeting and taking a photo with Jeremy Hansen - an up and coming Canadian Astronaut.

This past summer our team members have found a unique way to get involved in our community and give local youth the opportunity to explore robotics. Over 6 weeks, a dozen of our students have been running a Robotics Camp at the Queen Elizabeth Park Community and Cultural Centre. The camp is fully student-led, with our team members organizing, planning, and assembling the course structure and daily schedule for each week. The camp is for students 9-12 years of age who want to explore Vex and FLL, which are taught in alternating weeks. Each week brings new materials, ideas, and instructors. Our leaders also devise different projects and themes for each week such as space, underwater exploration, and natural disasters, so returning students can have new experiences. Campers are divided into teams as they work together to build and modify robots to compete in our weekly challenges. Our leaders were constantly on hand to assist and supervise campers, but they also added elements of fun. For example, our members built the Batmobile out of FLL lego as a fun side project that the kids would be interested in! The campers and our members have had a great time, and are looking forward to doing it again next year. Special thanks to Sarah for orchestrating the scheduling and the collaboration with the Town of Oakville, and to the QEP for working with us.

On Friday, July 15th Oakville Trafalgar Robotics participated in the Town of Oakville’s annual Midnight Madness event. The night was a ton of fun and a huge success, with our pit drawing lots of spectators. Last year’s Drive Team attracted a line-up as they gave kids rides down the block on our Chairbot. Last year’s competition robot MACKENZIE met crowds with displays of her capabilities and interacted with visitors by playing games of catch. Students made their way through the crowds answering questions and handing out information, while our new PA system allowed us to efficiently address everyone at once. The event was a great way to increase our team profile and speak with local families about our team, FIRST, FRC, and STEAM (Science, Technology, Engineering, Art, and Math). We also spread the word about the FIRST Lego League (FLL), encouraging families who were interested to enroll their kids into robotics programs. We had over 20 OT members attend the event, working in the pits and speaking to the crowds. We would like to thank our members for being knowledgeable, hard-working, approachable and enthusiastic, and for displaying Gracious Professionalism throughout the night. The event had a great turnout, with many other Halton FRC teams such as 3161 Tronic Titans and 771 SWAT attending. Team 3161 had great presentation outside their pit, displaying their robot’s dexterity and fine craftsmanship as it tackled obstacles from last year’s Stronghold games. SWAT brought a remote-controlled drone to the event, which captured great footage and a lot of attention from spectators. We look forward to seeing them compete next season.

The team did a demonstration at Cloverdale Mall for the Ontario Association of Certified Engineering Technicians and Technologists (OACETT). The team had tons of fun showing off our robot, LAMAR as well as talking about the 3D printing that we do

3D Printing Workshop at the 771 SWATposium

On Oct 31st, some of the team members attended Team SWAT 771's annual SWATposium. We would also like to congratulate team members Justin S and Thomas M on the awesome 3D printing workshop that they did!

On Saturday, November 21st, our team participated in the Oakville Santa Claus Parade! Everyone helped transform a truck into a beautiful holiday float that was driven through downtown Oakville Saturday morning. We handed out candy canes with cards attached to them which had information about FIRST teams in the community. Everybody had tons of fun and we are looking forward to doing it again next year!